To sit in the shade on a fine day, and look upon verdure is the most perfect refreshment.
Mansfield Park

It’s almost “Season” again here in Southwest Florida and many of our Snowbird members have returned. Yay! We are so glad to see them again!  It’s been a long summer break. The weather is finally a bit cooler and we look forward to a wonderful season ahead with our JasnaSWF family.

JASNA Florida SW met on November 18, 2017, at the South County Regional Library in Estero, Florida. First order of business was to elect officers. The following members were elected for 2017-2019:

After the election, RC Sara Dustin briefly summarized the Regional Coordinator business meeting. Some highlights from the meeting included a discussion of the membership year changes and a reminder for everyone to log into the Portal on the national site to renew their membership if they hadn’t already. 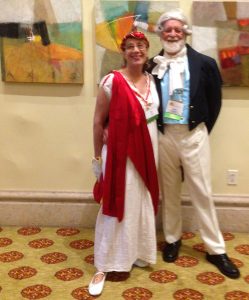 Sara highlighted sessions such as Christopher Cassidy’s discussion of microeconomics and game theory and James Nagle’s session on mourning rituals of the Regency era.

Nili Olay discussed Prof. Charles Lynn Batten’s idea that Austen was a realist in a romantic age in “Jane vs. the Victorians”. She also re-capped Sara’s talk, especially the comparison between the Parkers’ new exposed home vs. their old home in the valley in light of hurricane Irma. Jerry recapped some of the special events.  All three commented about the plenary talks. Check out the website for the event called Jane Austen in Paradise and explore more.

After we concluded our discussion of the sessions, we watched the powerful winning video of the JASNA Young Filmmakers Awards, “An Accomplished Woman” by Rivkah Penarelli née Massey. The members then had a lively and sometimes moving discussion of the short film and the power or reading.

As the meeting closed, we had a drawing for a hand painted cookie donated as a door prize by member Anja Carson.

We reminded members of the December 9th Birthday Tea and then we settled on a January 27th date to kick off the 2018 season. We will be discussing Persuasion, and member Sam Stewart will be providing articles for the members to peruse before the meeting.

We also discussed the possibility of having a Box Hill tea in April.

This year is going to be great! Be sure to join us at upcoming meetings and make sure you are on our email list so that you get all the new and announcements and follow us on our Facebook Page